Cry of Silence is the 6th episode of the second season of the original The Outer Limits television show. It aired on October 24, 1964.

Cry of Silence" is an episode of the original Outer Limits. It first aired on 24 October 1964, during the second season.

"In the not-distant future, the sound of Man will invade those unknown depths of space which as yet we cannot even imagine. In his own world there are no places left beyond the reach of his voice. His neighbor is no longer just next door, but anywhere at the end of a wire. And it all began when prehistoric man discovered the art of communication..."

A city couple driving in the countryside makes a turn into a mysterious valley road where their car hits a rock and stops working. After the couple leaves their car, the wife has a slight accident in which she rolls downhill and sprains her ankle. When the husband reaches her, they realise they are being stalked and attacked by tumbleweeds which appear to be possessed by some form of energy. At first they attempt to keep the tumbleweeds at bay with fire, but soon run out of firewood.

At this point they are saved by a severely disturbed (possibly schizophrenic) farmer named Lamont, who explains that things have been awkward in the valley ever since a "meteor" landed two weeks before, causing his farm to die out. Lamont tells them he stayed merely out of curiosity, but now the possessed weeds, trees and rocks won't allow him to leave either. The three make their way to Lamont's house where they spend a frightening night surrounded by tumbleweeds first and then thousands of frogs. The wife discovers Lamont's diary containing eloquent and intelligent passages regarding his awareness of an apparent alien presence. Come morning, they walk back to the car without trouble, only to be attacked by living rocks once they get there. One rock kills Lamont. The couple run back to the farmhouse, where Lamont eventually returns and sits down in a chair, remaining motionless, speechless and in a trance-like state, with the couple trying to arouse him, and then realizing that he is still dead, being possessed by an unknown entity. The husband then decides that the only way they are ever to escape is to attempt to communicate with whatever is behind the possessions. The husband manages to make contact through self-hypnosis, and is briefly possessed by what appears to be a non-corporeal alien mind that came to Earth out of mere curiosity, but failed to establish communication. The extraterrestrial presence bemoans its vain attempt at communicating with humans and eventually departs after transmitting the idea that mankind perhaps needs more time to evolve in order to communicate with it. After its departure everything returns to normal, allowing the couple to return to their car. On their way home, the husband compassionately philosophises that, while both of them are only a few miles away from their home, that alien intelligence must, to the contrary, be far further from its own.

"'And the light shineth in the darkness, and the darkness comprehended it not.' The sound of Man probes the dimensionless range of space, seeking an answer. But if it comes, will he hear? Will he listen? Will he comprehend?"

This is one of the episodes generally considered among the weaker offerings of the original series, partly due to the acting performances, but it still contains some notable horror. 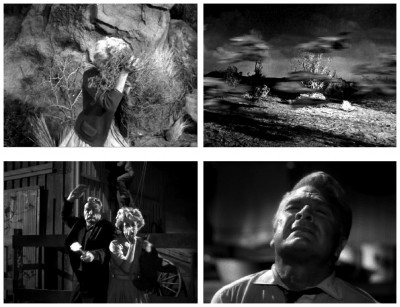 Retrieved from "https://theouterlimits.fandom.com/wiki/Cry_of_Silence?oldid=10284"
Community content is available under CC-BY-SA unless otherwise noted.