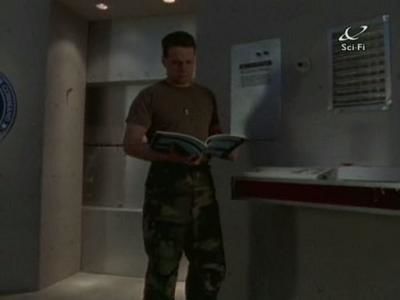 "Dead Man's Switch" is an episode of The Outer Limits (new series). It first aired on 4 April 1997, during the third season.

Ben Conklin, a lieutenant in the United States Air Force, is given the assignment of spending one year in a bunker 11,000 feet beneath Alaska.

“Young idealists often dream of having the power to save the world. But would that dream become a nightmare if saving the world could also mean destroying it?”

After arriving at the bunker, Ben is told by General James Eiger that the Hubble Space Telescope has photographed a fleet of alien ships heading towards Earth. Fearing the worst, the world's chemical, nuclear, and biological weapons stockpiles were linked to create a single doomsday weapon. Five people, including Ben, are placed in five United Nations Strategic Air Command bunkers around the world (United States, Russia, China, South Africa, and Australia), with the mission of controlling the activation of a final revenge weapon should the aliens turn out to be hostile and attempt to take over. An alarm sounds randomly, and at least one of the bunker occupants must hit a fail-deadly dead man's switch to temporarily disarm it. The switch is designed so that the operator's handprint and retinal scan are required for it to work. If a thirty-second countdown passes and no-one activates the switch, the doomsday weapon will fire and leave the surface of the Earth uninhabitable within one week. General Eiger assures Ben that if the aliens try to disarm the system, they will set it off and that "if we don't make it out of this alive, then no one else will either." To prevent the bunker occupants from being fed false information, they are sealed off from the world and can communicate only with each other and General Eiger.

As the months pass, the people in the five bunkers cope with the isolation and the uncertainty of the impending encounter. Ben develops a special relationship with Katya, the woman manning the Russian bunker. As their feelings for each other grow, the alien ships finally reach Earth. Claiming to be a scientific expedition, they send a number of "peaceful" ships to a summit meeting at Edwards Air Force Base. General Eiger relates the cautious optimism of the world's leaders, but then a week goes by without any further contact.

In an effort to discover what is going on, Hong, an electrical engineer who is manning the China bunker, rewires his bunker to power a shortwave radio and hears a small signal, saying that "diplomatic ceremonies were interrupted and a new development has begun".

When the signal fails, Hong attempts to get it back, only to break his air scrubbers, causing him to quickly suffocate on the venting carbon dioxide. Soon afterwards, Donald (South Africa) freezes to death when his life support system malfunctions. Shortly after this, Gwen's (Australia) bunker is penetrated and she is pulled upwards by an unknown party, leaving only Ben and Katya to continue pressing their switches. Having heard nothing more from General Eiger, Katya believes the situation to be hopeless and wants to stop responding to the alarm, allowing activation of the weapon. Ben disagrees as he still believes that the humans on the surface may be able to win the supposed conflict.

On day 367, a fire breaks out in Katya's bunker and since she is unable to escape, she is killed. After this, the devastated Ben begins to lose touch with reality. On day 369, his supply of water runs out and he decides to let the countdown reach zero. As the countdown is about to expire, he receives an urgent message from General Eiger telling him that they have finally defeated the invaders. Eiger pleads with Ben to continue pushing the switch until they can find a way to deactivate the doomsday weapon without setting it off and dig him out of his bunker. When the communication ends, however, Eiger is shown to be controlled by a parasitic alien, with Washington, D.C. outside his window a burning ruin and the rest of Earth possibly the same way.

The episode ends with Ben still in his bunker, with very little food left and the bunker systems beginning to fail, repeating to himself, "just keep pushing the button." The ending is ambiguous and it is left to the viewer to imagine his fate.

“Our destiny is controlled by the choices we make. Those choices can turn an ordinary man into a king, or reduce him to little more than a pawn. With the fate of the world in your hands, what would you choose?"

Retrieved from "https://theouterlimits.fandom.com/wiki/Deadman%27s_Switch?oldid=10067"
Community content is available under CC-BY-SA unless otherwise noted.