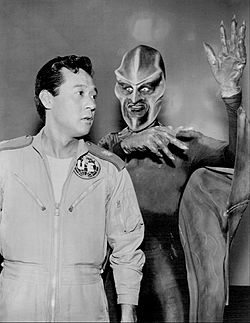 se to an unprovoked nuclear attack from the planet Ebon, a

group of soldiers representing Unified Earth is sent to fight the enemy on their alien world. Captured en route to Ebon, the soldiers undergo physical and psychological torture and interrogation apparently at the hands of the Ebonites, demonic seeming, bat-winged aliens who possess the ability to control the five senses. Their wings would presumably also confer the power of flight.

In fact the Ebonites are a relatively benevolent pacifistic species who had made the nuclear strike on Earth by accident.

The same species or a closely related one seems to be controlling the interstellar gladiatorial combat in the episode "Fun and Games". This seems to show that although normal Ebonites are benevolent, their species has an innate predilection for behind the scenes manipulation and control.

Retrieved from "https://theouterlimits.fandom.com/wiki/Ebonites?oldid=6243"
Community content is available under CC-BY-SA unless otherwise noted.