Joshua Hayward and his daughter Sarah wake one morning to find a four-block section of their suburban neighbourhood surrounded by a mysterious energy barrier.

Sarah finds a badly disfigured alien, Adrielo, who tells her that her neighborhood has been grabbed and moved by another race of aliens. He shows her a way through the energy barrier to his own captured realm and begs her to help him save his people, as humans are more advanced. Meanwhile, her father Joshua also finds a way through the barrier and comes face-to-face with their captors, the Triunes, a slothful race who feel physical activity is beneath them. After experimenting on Joshua, they explain to him that he, his daughter and the rest of the inhabitants of the neighbourhood have been taken as part of a feasibility study into the suitability of humans for slavery. If they are found able to survive the aliens' native environment, the rest of Earth's population will also be taken and enslaved.

Meanwhile, Sarah finds the rest of Adrielo's people. They are dying from a disease that is turning them to stone and she accidentally becomes infected. Joshua eventually finds her and she pleads with him not to touch her lest he also became infected. They both slip back through the energy barrier and return to their own neighborhood, where everyone has gathered at the church to discuss their predicament. Joshua explains the purpose of the energy barrier to the other residents and they wonder what choice they have other than to serve the Triunes when the time comes and they run out of supplies, as there is no way to return to Earth or call for help. Joshua explains the disease his daughter has been infected with, and suggests they deliberately infect themselves to save Earth from enslavement by the Triunes. After discussing it, Joshua convinces everyone to join hands in the church to sacrifice themselves and prove that humans are unsuitable as slaves. A flash-forward shows all the residents turned to stone statues. The giant pit on Earth from their neighborhood being removed is shown as the closing narration is made. 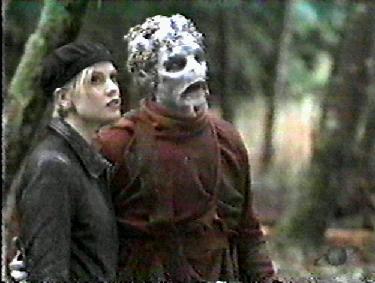 Retrieved from "https://theouterlimits.fandom.com/wiki/Feasibility_Study?oldid=8440"
Community content is available under CC-BY-SA unless otherwise noted.