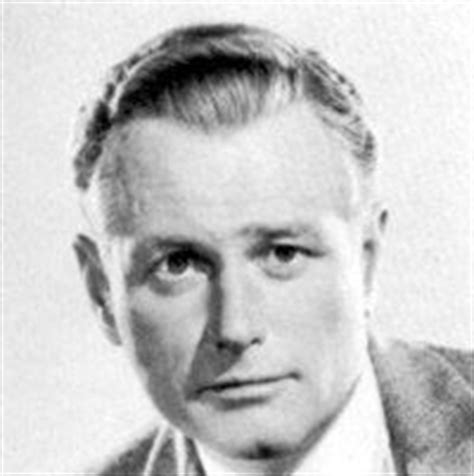 George Macready--the name probably doesn't ring any bells for most but the voice would be unmistakable. He attended and graduated from Brown

University and had a short stint as a New York newspaperman, but became interested in acting on the advice of colorful Polish émigré classical stage director Richard Boleslawski, who would go on to Hollywood to direct some notable and important films, including Rasputin and the Empress (1932)--the only film in which siblings John Barrymore, Ethel Barrymore and Lionel Barrymore appeared together--and Clive of India (1935) with Ronald Colman. Perhaps acting was meant for Macready all along--he claimed that he was descended from 19th-century Shakespearean actor William Macready.

In 1926 Macready made his Broadway debut in "The Scarlet Letter". His Broadway career would extend to 1958, entailing 15 plays--mainly dramas but also some comedies--with the lion's share of roles in the 1930s. His Shakespearean run included the lead as Benedick in "Much Ado About Nothing" (1927), "Macbeth" (1928) and "Romeo and Juliet" (1934), with Broadway legend Katharine Cornell. He co-starred with her again in "The Barretts of Wimpole Street" and with with Helen Hayes in "Victoria Regina" twice (1936 and 1937).

Macready's aquiline features coupled with distinctive high-brow bottom-voiced diction and superior, nose-in-the-air delivery that could be quickly tinged with a gothic menace made him perfect as the cultured bad guy. Added to his demeanor was a significant curved scar on his right cheek, remnant of a car accident in about 1919--better PR that it was a saber slash wound from his dueling days as a youth. He did not turn to films until 1942 and did not weigh-in fully committed until 1944, with a host of both well-crafted and just fair movies until the end of World War II. When he went all in, though, he excelled as strong-willed authoritarian and ambitious, murderous--but well-bred--villains. Among his better roles in that period were in The Seventh Cross (1944), The Missing Juror (1944), Counter-Attack (1945) and My Name Is Julia Ross (1945) with a young Nina Foch. Averaging six or more films per year throughout the 1940s, he appeared not only in dramas and thrillers, but also period pieces and even some westerns. His standout role, however--and probably the one he is best remembered for--was the silver-haired, dark-suited and mysteriously rich Ballin Mundson in Gilda (1946), who malevolently inserted himself into the lives of smoldering Rita Hayworth and moody Glenn Ford.

By the early 1950s he had sampled the waters of early TV. He had many appearances on such anthology series as Four Star Playhouse (1952), The Ford Television Theatre (1952) and Alfred Hitchcock Presents (1955), among others. He became a familiar presence in episodic TV series beginning in 1954. He made the rounds of most of the hit shows of the period, including a slew of westerns, including such obscure series as The Texan (1958) and The Rough Riders (1958). He was familiar to viewers of crime dramas--such as Perry Mason (1957)--and such classic sci-fi and horror series as Thriller (1960), The Outer Limits (1963) and Night Gallery (1969). He did some 200 TV roles altogether, but still continued his film appearances. He assayed what many consider his best role as the ambitious French Gen. Paul Mireau, a fanatic and martinet whose lust for fame and glory leads to the deaths of hundreds of French soldiers in a senseless frontal attack on heavily fortified German lines in Stanley Kubrick classic antiwar film Paths of Glory (1957). Macready's performance stood out in a film brimming with standout performances, from such veterans as Kirk Douglas, Adolphe Menjou, Ralph Meeker and Timothy Carey. The film was even more striking when it turns out that it was based on a true incident.

Macready stayed busy into the 1960s, mainly in TV roles. He had a three-year run as Martin Peyton in the hit series Peyton Place (1964), the first prime-time soap opera and a launching pad for many a young rising star of the time. His film roles became fewer, but there were some good ones--the Yul Brynner adventure period piece Taras Bulba (1962) and a meaty role as an advisor to US Prlesident Fredric March attempting to stop a coup by a right-wing general played by Burt Lancaster in the gripping Seven Days in May (1964). His next-to-last film appearance was as a very human Cordell Hull, Secretary of State, in Universal's splashy, big-budget but somewhat uneven story of Pearl Harbor, Tora! Tora! Tora! (1970).

Another role that stands out in his career is a one-in-a-kind film which you would not expect to find George Macready--Blake Edwards' uproarious comedy -The Great Race (1965)_. Macready shined in one of the film's several subplots, this one a spoof of the "Ruritanian" chestnut "The P Prizoner of Zenda", in which the racers find themselves in the middle of palace intrigue in a small European monarchy. Macready played a general trying to stave off a coup by using Professor Fate (Jack Lemmon, who is a double for the drunken ruler. Macready held his own with such comedy veterans as Lemmon, Tony Curtis, Natalie Wood and a host of others. To top it of, Macready gets involved in one of the great pie fights in film history, and takes one right in the kisser!

In real life George Macready was as cultured as he appeared to be on-screen. He was a well-regarded connoisseur of art, and he and a fellow art devotee--and longtime friend--opened a very successful Los Angeles art gallery together during World War II. As far as the villain roles went, Macready was grateful for the depth they allowed him through his years as both film and television actor. "I like heavies," he once said, and to that he added with a philosophic twinkle, "I think there's a little bit of evil in all of us."

Retrieved from "https://theouterlimits.fandom.com/wiki/George_Macready?oldid=5260"
Community content is available under CC-BY-SA unless otherwise noted.