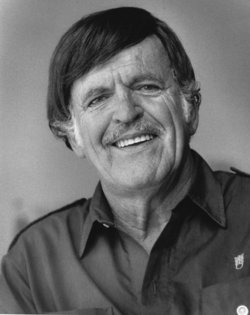 Robert Cleveland Johnson (May 4, 1920–December 31, 1993), known professionally as Bob Johnson, was an American actor and voice actor who played supporting roles on series television and in films from the late 1950s until a few years before his death. He frequently provided the voices of numerous alien creatures on the original 1963-1965 The Outer Limits TV series, for which he was uncredited.

However, Johnson is probably best known as the "voice behind the scenes", who gave Special Agents Dan Briggs and Jim Phelps their recorded mission briefings on both incarnations of the Mission: Impossible television series. Johnson voiced Clegg Hoyt's role as Pitcairn, the transporter chief of the fictitious USS Enterprise, in the first pilot episode, "The Cage", of the original NBC science fiction series Star Trek, with Jeffrey Hunter in the starring role. "The Cage" was subsequently broadcast as the two-part episode, "The Menagerie."

Retrieved from "https://theouterlimits.fandom.com/wiki/Robert_Johnson?oldid=9852"
Community content is available under CC-BY-SA unless otherwise noted.