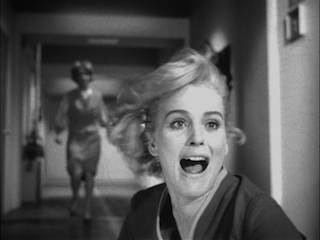 The Outer Limits is an American television series that was broadcast on ABC from September 16, 1963 to January 16, 1965 at 7:30 PM Eastern Time on Mondays. The series is often compared to The Twilight Zone, but with a greater emphasis on science fiction stories (rather than stories of fantasy or the supernatural matters). The Outer Limits is an anthology of self-contained episodes, sometimes with a plot twist at the end.

There were only two seasons in total of the original Outer Limits.

The Outer Limits was originally broadcast on the American television network ABC (1963–65). In total, 49 episodes were produced. It was one of many series influenced by The Twilight Zone and Science Fiction Theatre, though it ultimately proved influential in its own right. In the unaired pilot, the series was called Please Stand By, but ABC rejected that title. Series creator Leslie Stevens retitled it The Outer Limits. With a few changes, the pilot aired as the premiere episode, "The Galaxy Being".

Writers for The Outer Limits included creator Stevens and Joseph Stefano (screenwriter of Hitchcock's Psycho), who was the Season 1 producer and creative guiding force. Stefano wrote more episodes of the show than any other writer. Future Oscar-winning screenwriter Robert Towne (Chinatown) wrote "The Chameleon", which was the final episode filmed for Season 1. Two especially notable Season 2 episodes "Demon with a Glass Hand" and "Soldier" were written by Harlan Ellison, with the former episode winning a Writers' Guild Award. The former was for several years the only episode of The Outer Limits available on LaserDisc.

Season 1 combined science fiction and horror, while Season 2 was more focused on 'hard science fiction' stories, dropping the recurring "scary monster" motif of Season 1. Each show in Season 1 was to have a monster or creature as a critical part of the story line. Season 1 writer and producer Joseph Stefano believed that this element was necessary to provide fear, suspense, or at least a center for plot development. This kind of story element became known as "the bear". This device was, however, mostly dropped in Season 2 when Stefano left (two Season 1 episodes without a "bear" are "The Forms of Things Unknown" and "Controlled Experiment", the first of which was shot in a dual format as science fiction for The Outer Limits and as a thriller for a pilot for an unmade series The Unknown. Actor Barry Morse, who starred in "Controlled Experiment", states that this episode also was made as a pilot for an unrealized science fiction/comedy series. It was the only comedic episode of The Outer Limits).

Earlier Season 1 episodes with no "bear" were "The Hundred Days of the Dragon" and "The Borderland" made before the "bear" convention was established. Season 2 episodes with a "bear" are "Keeper of the Purple Twilight", "The Duplicate Man", and "The Probe". "Bears" appear near the conclusion of the Season 2 episodes "Counterweight", "The Invisible Enemy", and "Cold Hands, Warm Heart".) The "bear" in "The Architects of Fear", the monstrously altered Allen Leighton, was judged by some of ABC's local affiliate stations to be so frightening that they broadcast a black screen during the "Thetan's" appearances, effectively censoring most of the show's last act. In other parts of the United States, the "Thetan" footage was tape-delayed until after the 11pm/10c news. In others, it was not shown at all. The series was shot at KTTV (MetroMedia Square) on sound stage # 2. Season 1 had music by Dominic Frontiere, who doubled as Production Executive; Season 2 featured music by Harry Lubin, with a variation of his Fear theme for One Step Beyond being heard over the end titles.

Retrieved from "https://theouterlimits.fandom.com/wiki/Seasons?oldid=9967"
Community content is available under CC-BY-SA unless otherwise noted.