The N'Tal do not have bodies of their own, instead they require hosts to live — but they have the technology to reanimate, cure and occupy the bodies of the recently dead.

Dr. Michael Alders (Mykelti Williamson), an oncologist, is put in charge of the N'Tal relocation project: the collection and use of human dead that are not too badly injured and therefore suitable for use as N'Tal hosts. Alders does not trust the N'Tal and considers them parasites. Despite his moral qualms over the project, Alders realizes how beneficial the N'Tal technology can be for helping the living.

However, the project suffers from the logistical difficulties: There are approximately two hundred thousand N'Tal needing hosts and the selection criteria for corpses are quite strict. Without bodies to inhabit, the N'Tal will die within two years — including Kadimas (Richard Grove), the N'Tal liaison Alders has come to know well.

The project continues smoothly until Alders' best friend Jim (D. W. Moffett) is in a car accident. He survives, but his wife Karen (Rae Dawn Chong) is killed and her body is found suitable to act as a N'Tal host. Alders is unable to remove her from the list.

Jim begs Alders to let him observe the transfer so that he can see his wife alive one last time — even though it will not really be her. After the transfer Jim breaks into Alders' office and steals the details of her new life. He goes to see the N'Tal now occupying his wife's body — something that is strictly forbidden. Alders relents, trusting Jim's assurances that he will act responsibly. This puts Alders in an extremely difficult situation. He receives a complaint from the N'Tal woman who, though sympathetic to Jim's loss, was given assurances that such a thing would never happen.

Alders confronts Jim. Jim tells him that he has seen the N'Tal behaving suspiciously: gathering together, transferring computer discs, gaseous substances, and information about their mothership. Soon after this, Jim is found dead, apparently as result of suicide. Alders, never fully trusting of the N'Tal, begins to investigate them. He discovers that the reanimated N'Tal are collecting pressurised tanks and gases that could be toxic to humans in certain combinations. Furthermore, the tanks are being shipped to a company Synergistic Technologies owned by reanimated N'Tal. Suspicious that they may be planning to kill large numbers of humans in order to provide the project with enough suitable hosts, he tries to contact and confront his N'Tal liaison Kadimas... but Kadimas, too long without a body, has become seriously weakened and is unavailable. His new liaison is a harsher and less sympathetic N'Tal who explains that Kadimas's position does not allow him any priority in the queue for new hosts.

Alders attempts to convince his superiors of his suspicions, but to no avail. He decides to arm himself and visit Synergistic Technologies, where he sees N'Tal gathering. He sneaks into the building, only to be spotted by Jim... his old friend, whose body is now a host to Kadimas. Alders is invited inside and sees a ceremony in which a baby born to two N'Tal is displayed — fully Human in both body and mind. The N'Tal, knowing that their current Human life will be their last, will leave only more Humans behind as they age and die. The equipment and gas are used to recreate a small part of the N'Tal homeworld in remembrance. He is invited to take part in a N'Tal ceremony committing themselves to living on Earth and becoming part of humanity.

“What if you were to wake up to a different world tomorrow... a world of invaders? Would you raise your voice with the aliens, in a chant of remembrance and regret, bidding farewell to a vanished world? Or would you fight against those who might ultimately help us?” 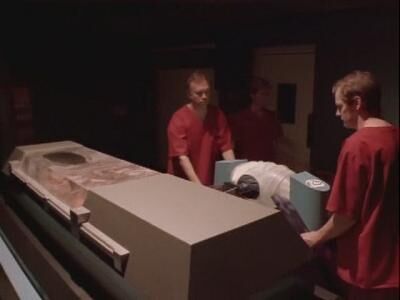 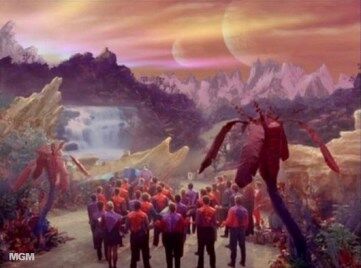 Retrieved from "https://theouterlimits.fandom.com/wiki/Second_Soul?oldid=10337"
Community content is available under CC-BY-SA unless otherwise noted.