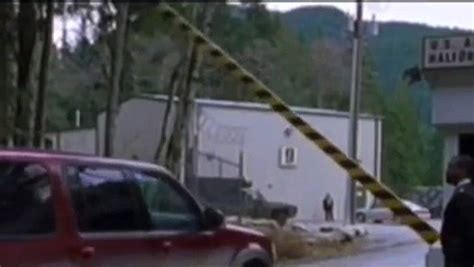 "The Grid" is an episode of The Outer Limits television show. It was first broadcast 14 July 2000, during the sixth season.

A man investigating the murder of his brother uncovers a mind control project controlled by a super-intelligent computer.

Scott Bowman gets a strange message from his brother Peter, and decides to drive back to their hometown of Halford, Washington, to see what's wrong. But when he gets there, he discovers that Peter is dead and his wife Eileen has been charged with his murder.

But that's not the only shock awaiting Scott. The town where he grew up has been transformed. Antenna towers dot the landscape and the people act strangely, as if they are under some kind of sporadic mind control. Scott goes to the jail to visit Eileen, where she warns him about the towers — just moments before grabbing the Sheriff's gun and killing herself. This turn of events convinces Scott that he needs to investigate further. He meets with a former colleague of Peter's, Dr. Jim Holbrook, who seems friendly, but doesn't give Scott any information.

Scott doesn't know where to turn next, when out of the blue, one of Peter's former students, a 12-year-old girl, shows up. She tells Scott about his brother's involvement in the computer project to control minds and that he tried to put a stop to it. She said that Peter had a book that holds the secret to what is known as Project Halford, with codes to shut it down. She encourages him to find the book and also warns him to trust no one in town. Scott finds the book and a videotape that reveals the Army's plan to construct a neural computer network that would communicate directly with the brain. It also reveals that the project spun out of control and that Peter stole vital codes in an attempt to halt the computer's drive to take over the minds of the townspeople.

With the help of the 12-year-old girl, Scott sneaks into the Army base where his brother used to work. He accesses a keyboard and enters the program code to disable the computer. In a twist, it turns out that the code he entered was not to disable the computer, but was actually what was needed to put the program completely on line. The 12-year-old girl had actually been controlled by the computer all along, and had coaxed him to find the book to help the computer. Realizing what happened, Scott pulls out a gun and shoots the computer in a last-ditch effort to destroy it, and escapes. Scott returns home and greets his wife. He begins to tell her of the dire situation, when he looks out his window and is stunned to see one of the towers outside in the neighborhood. It turns out that the towers have been installed across the nation, including near his home. Scott's wife is already under their control and shoots Scott.

Retrieved from "https://theouterlimits.fandom.com/wiki/The_Grid?oldid=9705"
Community content is available under CC-BY-SA unless otherwise noted.