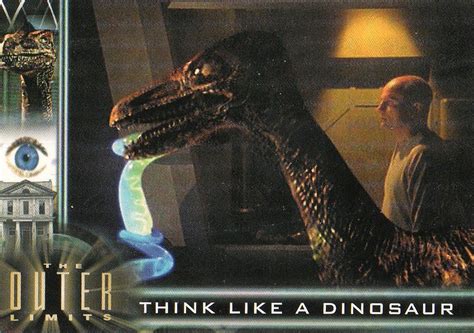 Reptilian Dinosaur like species  described as pacifist and vegetarian by scientist Michael Burr  they however absolutely lack to have anything similar to human emotions.

The Hannen planet has a different atmosphere as the conditions set up for the species on Earth's Moon requires three times the density of Earth normal.

This species perhaps related to the reptilians that can be seen in other chapters for example "Quality of Mercy" and "A Light Brigade"  however these aliens are fairly more anthropoid looking and omnivorous as they feed on some insect like lifeforms. Other reptilian like species is also  featured in 2nd season episode the "The Deprogrammers" a race that enslaved the humans.

Retrieved from "https://theouterlimits.fandom.com/wiki/The_Hanen?oldid=9565"
Community content is available under CC-BY-SA unless otherwise noted.