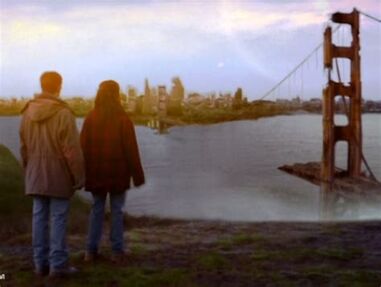 "The Origin of Species" is an episode of The Outer Limits television show. It was first broadcast on November 14, 1998, during the fourth season, and is a sequel to a previous episode, "Double Helix".

“Throughout the ages humans have looked to the heavens and wondered, ‘Where did we come from, and where are we going?’ But will we find those answers in the stars, or in ourselves?”

After lifting off into space, the rocket is seen heading through the cosmos. It's a very shaky ride inside a strange-looking ship. The students and Doctor Nodel are all secure against a sort of upright wall. The ride stabilizes after they exit the atmosphere.

Soon after some questioning from the students, Doctor Nodel places his hand on a symbol, but he and his son Paul are absorbed into the ship. The confused students search for any trace of them after their disappearance. They try to remain calm and rational, but fear that the ship might attack the rest of them. They attempt to stay together, and talk among themselves, but decide to try to wait until the ship reaches its destination.

Suddenly, the ship rocks violently and it seems they're breaking apart, but actually the ship is reshaping into another form: a more aerodynamic craft. They are amazed at the changes, and are afraid of the possibilities, but decide to put their fears aside and split up to map out the ship to search for anything useful or possibly more information about the ship itself.

Hope, Paul's girlfriend, who stayed behind in the central room, is looking around. She reads through the doctor's report. Meanwhile, one of the student pairs is inspecting a corridor. The girl asks what the guy thinks the ship is made of, to which he responds some sort of metallic crystal. Comments are made that the ship feels more like a 'living thing'. Another group find a symbol that looks like the one that had been on the Doctor's hand.

Back in the central room, Hope is still reading the report. It reveals that Doctor Nodel had a genetic disease. On the last page is a diagram of the symbol, and a note about a dinner date. As she closes the book, she hears a voice coming from the machine into which Doctor Nodel and Paul had apparently been absorbed. Curious, she places her hand close to the machine and is zapped. It is then that a sort of holographic image of both the doctor and Paul (they alternate), trying to tell her to 'listen and prepare', appears then disappears.

Another group disappears into a moving wall in the corridor, and strange noises are heard. When the wall they disappeared in moves back, they are gone. The other group returns, to find Hope alone in the center room. She gives one of the guys the report, and tells him to look through it.

They theorize that the ship might not have intentionally attacked Doctor Nodel, but that his disease (which would have been passed on to his son genetically) could have interfered with their ability to interface with the ship, which led to their disappearance.

The ship lands on Earth, but an Earth of the future, without humans. Investigating, they learn from a memorial that the human race apparently began to experiment with genetic engineering that gave humans new abilities and features (such as wings) but also ultimately left the human race sterile. They created the memorial as a record of their existence and a warning of the fatal mistake that they made.

Hope and the students theorize that the aliens might have been a race that originated on Earth, and wiped themselves out in a similar manner. Foreseeing the possibility that the next sentient species to arise could suffer the same fate, they built the ship to save a sample of that race before it wiped itself out, and protect it until it could repopulate the Earth. The ship extracted genetic material from the group students (and Hope) during the journey and created babies (modifying their genetics to avoid the dangers of inbreeding), creating a sufficient number of humans with enough genetic variation to repopulate the Earth.

“It is said that those who do not learn from history are doomed to repeat it. Will we be wise enough to learn?”

Retrieved from "https://theouterlimits.fandom.com/wiki/The_Origin_of_Species?oldid=10548"
Community content is available under CC-BY-SA unless otherwise noted.