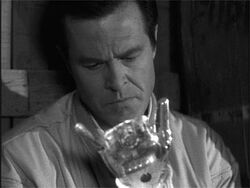 Trent is a man with a talking glass hand and no memory of who he is or why he is being pursued. It is later revealed that he is a robot that believed himself to be human, and that he must safeguard the return of the human after twelve-hundred years in a future where humans are extinct.

Retrieved from "https://theouterlimits.fandom.com/wiki/Trent?oldid=11255"
Community content is available under CC-BY-SA unless otherwise noted.