On the day of Charles Halsey's inauguration as President of the United States, scientists detect a large object heading towards Earth at half the speed of light. Halsey, a peace-loving liberal, is rushed to an underground bunker by the Presidential transition team, a group of aides and military men that share the hawkish bent of the previous administration. As the crisis unfolds, it becomes clear that the object came from an armada of alien ships, which are fast approaching Earth. Contact is made, but the aliens' message is unclear. As the U.S. and the other nuclear powers gear up to defend themselves, Halsey must decide: Are these invaders bent on conquering earth or benevolent explorers reaching out to another civilization?

Is man the center of the Universe made in the image of his God? Or is mankind merely the temporary occupant of an insignificant world about to be extinguished?

En route to his Inauguration Ball, the newly-sworn in President Charles Halsey, who succeeded a President Burns is diverted. He arrives in a nuclear bunker and is greeted by his staff, (or rather the staff appointed by his predecessor), such as Tarkman who was Burns' National Security Advisor, Burns' junior Science Advisor Dr. Janet Brevson and the Commander of the military's Space Program, General Covington plus members of the transition team between Burns and Halsey.

Astronomers have detected an object traveling through space at half the speed of light, and it is predicted to impact Earth within 30 minutes, wiping out human civilization. American military leaders advise the President to mobilize the military, in order to provide some security for the survivors of the impact. Other nations across the world do likewise, and tensions between nations begin to rise as worldwide military systems are put on alert. It is soon calculated, though, that the object will miss Earth. The bunker's staff watch as the object crashes into the far side of the moon in an immense fireball.

The celebrations are short-lived, however. Astronomers identify a group of objects traveling behind the original, and inform the President that the group is in fact a fleet of spaceships. The President decides to conceal this information from the rest of the world, triggering arguments between the bunker's military and civilian personnel. Theories on the original object begin to surface - the military leaders argue that it was a display of force designed to scare Earth into surrender, whilst the scientists argue it was done as part of a maneuver to slow down. As the arguments continue, a fax comes through from Moscow, revealing that the Russians are also aware of the approaching fleet and are determined to protect their country at all costs.

As the fleet approaches Earth, an American military communications satellite is overloaded and disabled by an energy pulse, further aggravating the situation. The civilian scientists argue that the aliens are attempting to communicate and inadvertently broke the satellite, whilst the military leaders claim that the aliens are trying to disable Earth's communications as the first step of an invasion. The First Lady, Elizabeth, advises the President to stay calm and voices her opinions that the aliens have peaceful intentions. However, President Halsey gradually succumbs to the arguments of the military and orders a further military escalation. His leading general informs him that the United States possesses a nuclear weapon on board the space shuttle, and advises the President to deploy it. When Halsey expresses shock that the United States possesses a weapon outlawed by international treaties, the military admit that it is illegal, but that it is also the only chance they have of defending the planet against the aliens. Meanwhile, the Russians mobilize their nuclear deterrents, declaring that they intend to use the bombs against any alien forces which violate Russian airspace.

As the fleet settles into orbit around Earth, another satellite begins to receive a signal from the alien fleet. Scientists at NASA contact the bunker to say that they have discovered a video/audio message within the energy beam, and relays the message to the bunker. The message shows a humanoid alien making a speech, but no one can understand its bizarre language. At this point, scientists in the bunker realize that the object that struck the moon was a quantum singularity, which provided a virtually endless supply of energy for the alien fleet. Civilian advisors argue that the impact on the moon may have been a gift; a way for humanity to develop space technology. The military argues that it was a demonstration of the aliens' superior arms technology and advises the President to deploy the nuclear device on board the shuttle. During this time, the press is focusing on critics of the new Halsey administration, who claim that his inaction betrays his campaign slogan of "Let me be your friend". The Russians become suspicious that the United States is secretly negotiating with the aliens, and to put the Russians' fears to rest, Halsey infuriates his generals by releasing the alien message to the world. He also sends a video message in reply, explaining that the world is divided into many nations, and that he cannot speak for them all. He welcomes the aliens to Earth, but explains that due to increasing tensions, the aliens must remain in orbit until a diplomatic summit between the humans and the aliens can be arranged. The message is relayed to the alien fleet and the world, prompting the Russians to flex their military muscles in order to secure a prominent position at the negotiations.

The bunker is relayed another message received from the aliens, apparently in response. Again, though, the bunkers' staff cannot understand the alien language and wait frustratedly for their cryptanalysts to decipher the speech. Meanwhile, Halsey asks his leading general what move they should expect next if the aliens' intentions are hostile. He replies that the aliens would probably send a scout to test the humans' defenses, and when one of the orbiting ships breaks formation and enters the atmosphere, the military demands a show of force. The ship heads for the Pacific Ocean and strikes the water at Mach 5. The President, shaken by the prospect of invasion, is unable to make a decision. His civilian advisors and Elizabeth try to convince him that the aliens did not understand his message, or only understood his welcome to Earth. His generals, though, argue that it is the opening stage of a full-scale invasion. Halsey orders the United States military to DEFCON 2, and the Russians mobilize their nuclear forces to strike any further alien forces which arrive on the planet. Some of the bunker's scientific staff speculate that the aliens live in a water-based environment, causing panic amongst the military that the aliens are intent on an invasion in order to gain control of Earth's oceans. Halsey finally succumbs to the military panic and orders an immediate response using the space shuttle's nuclear device. At the same time, the Russians launch nuclear missiles at the alien fleet from submarines in the Bering Sea. However, the aliens turn their energy beams on the shuttle and submarines, destroying them instantly. As a defensive measure, the aliens launch two weapons at Washington, DC and Moscow. The staff in the bunker quickly realize the aliens' intentions - they believe that Washington and Moscow are the capitals of the world, and launch immensely powerful bombs in order to protect their fleet from further attacks and prevent the humans from launching a catastrophic nuclear attack on their own planet. As the bombs approach, the bunker's staff realize that the citizens of Washington and Moscow have little to no hope of survival.

In the final seconds before the bomb lands on Washington, a fax comes through from the cryptanalysts, having decoded the alien's original message. They realize that the aliens do in fact live in a liquid environment and that they were in fact speaking in plain English, having intercepted countless transmissions from Earth during their journey. Having removed the liquid garble from the message, Halsey's chief civilian advisor informs him of what the original transmission said. The alien in the message said simply, "Let us be your friends". Halsey deeply regrets his decision. Then there is a bright flash, implying that the bombs have hit.

To those who would fail to heed their own words be warned: you never know who's listening. 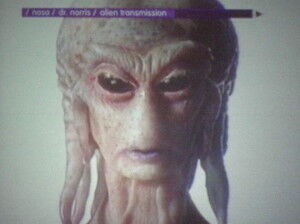 Retrieved from "https://theouterlimits.fandom.com/wiki/Trial_by_Fire?oldid=11186"
Community content is available under CC-BY-SA unless otherwise noted.